Blue skies were forecast for the whole weekend, and on Saturday we headed into Oteake via the Mt Kyeburn track, accessed from Danseys Pass. This is a climb around the slopes up to the north face of Mt Kyeburn, giving a view across a large portion of the DOC park. In the dry conditions there were no issues heading up the well formed track. 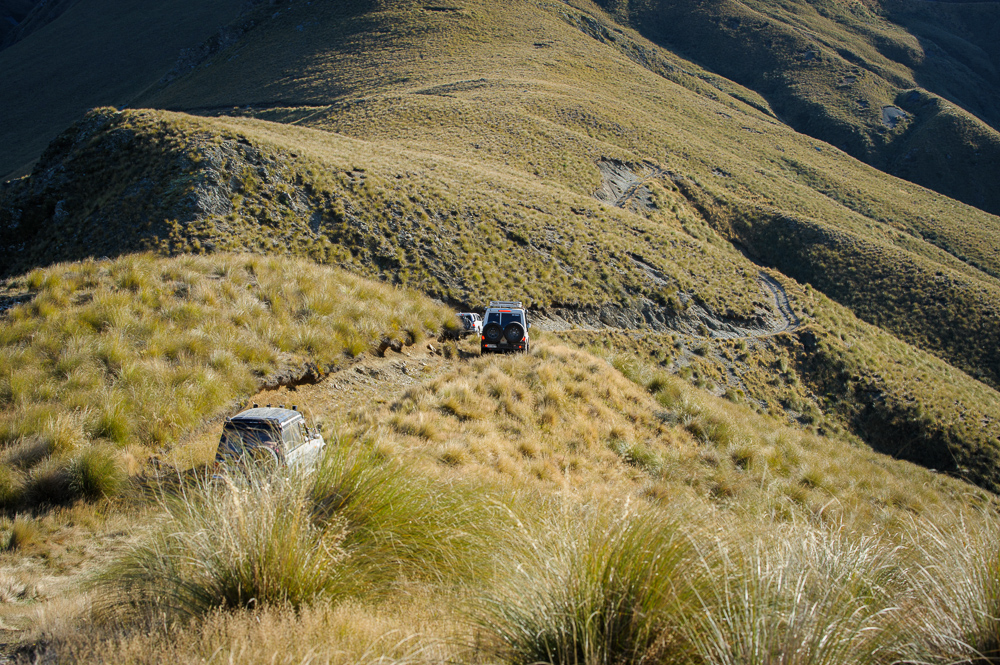 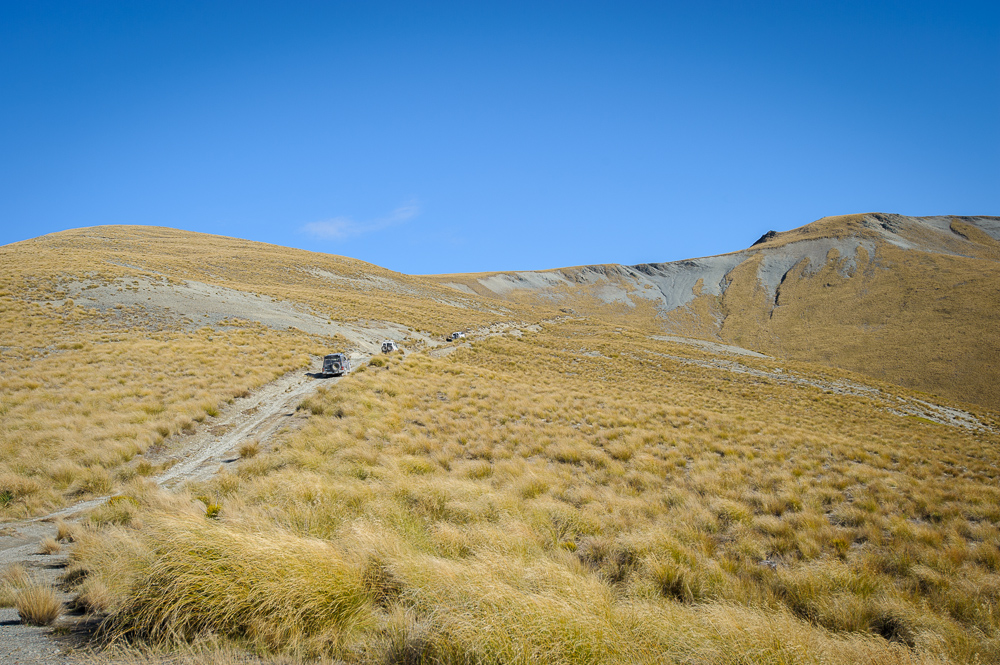 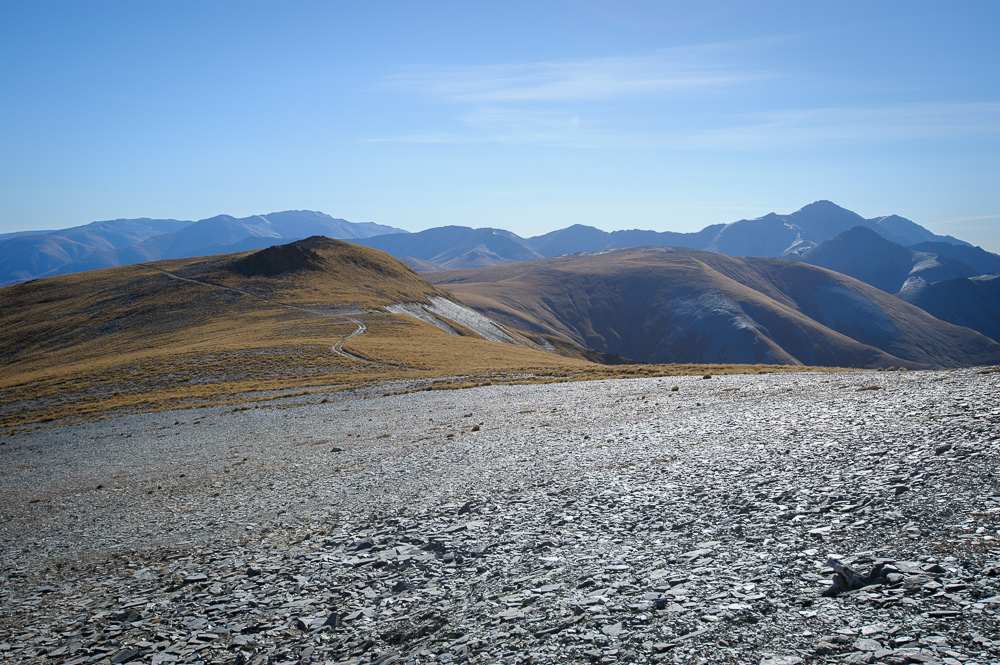 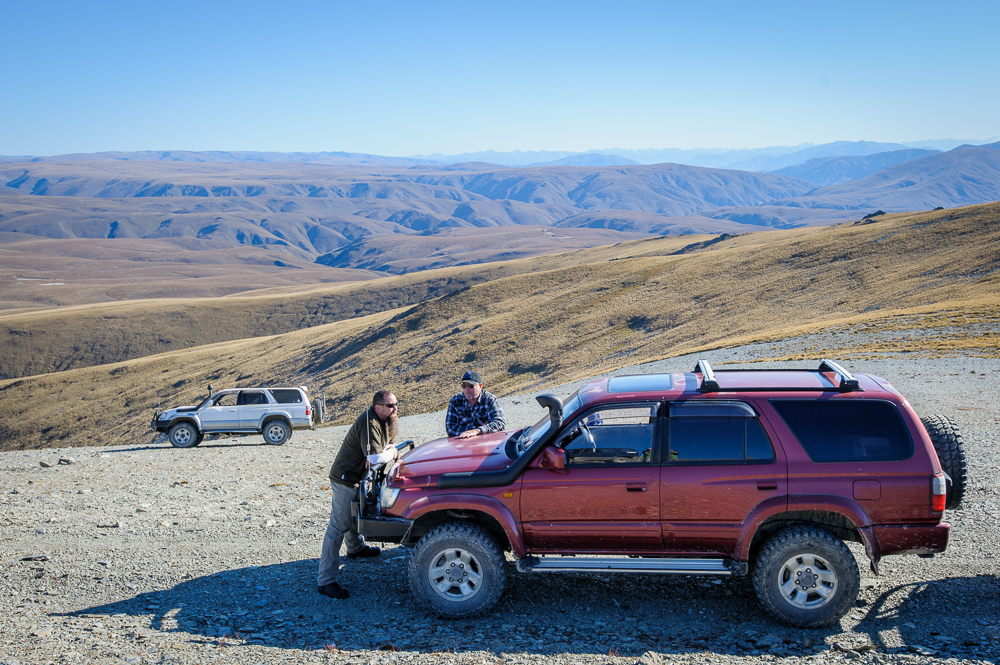 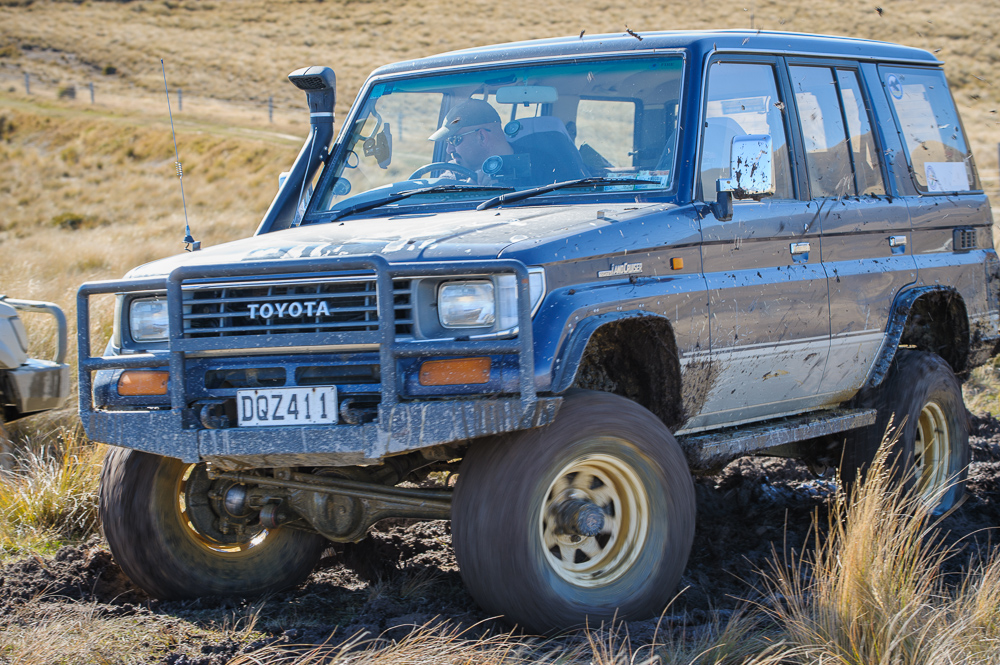 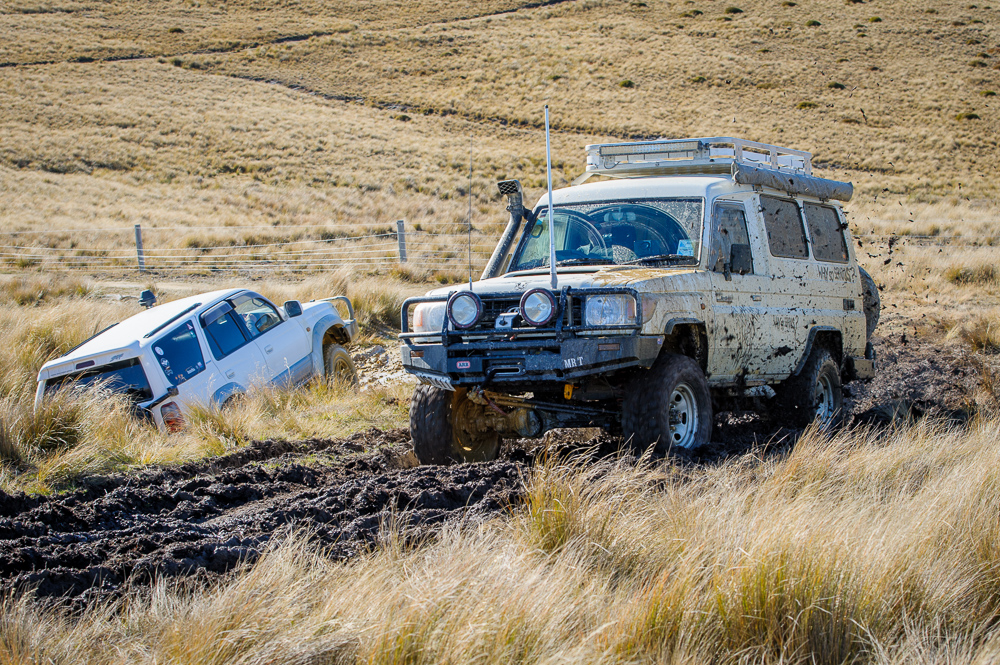 From here we headed down into the Mt Buster diggings. Unfortunately these striking sand faces are now quite cut up by vehicles, reducing their visual impact. 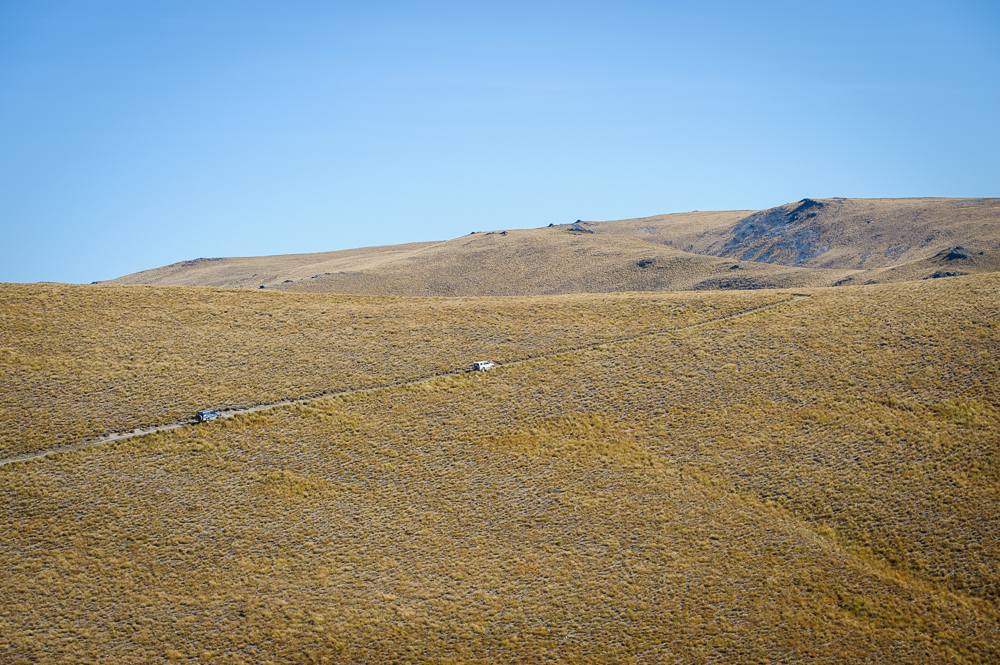 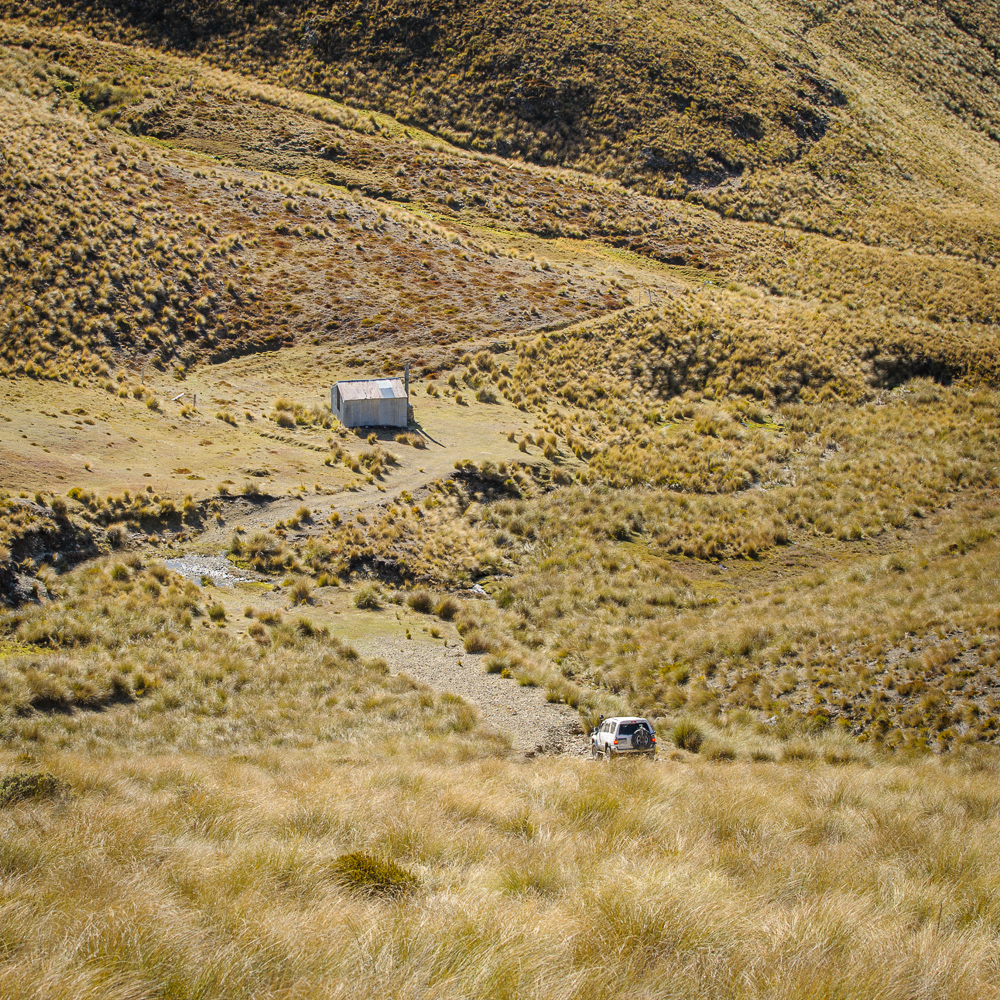 Then west past Mt Buster, to a hut in the valley behind the Ida Range for lunch. The track had a washout, and as GC went down, he suggested leaving a vehicle at the top to pull out again, as there was a decent washout that became deeper at the bottom of the track. GC, Felix, and GT made it down, with Felix and GT becoming more familiar with the washout than GC. 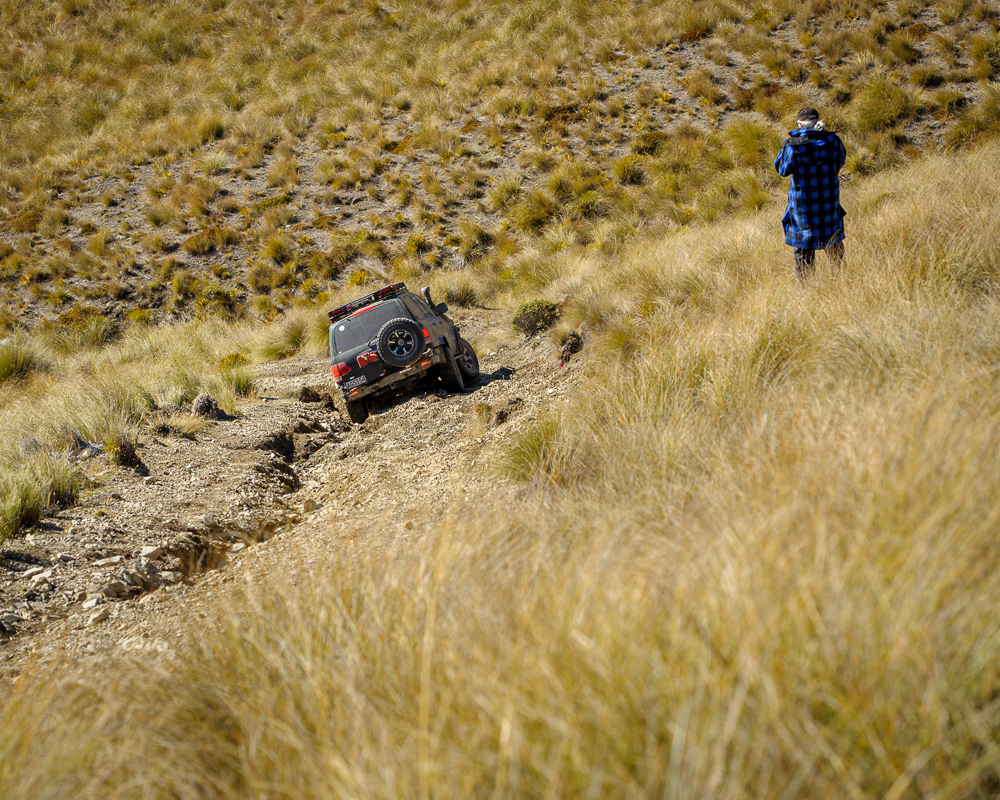 After lunch, GC made it out again after airing down his tyres and keeping momentum up, but Felix and GT inspected the washout closely again. The Troopy eventually had to give GT a pull out of the washout, as the track kept disappearing when GT needed traction the most. 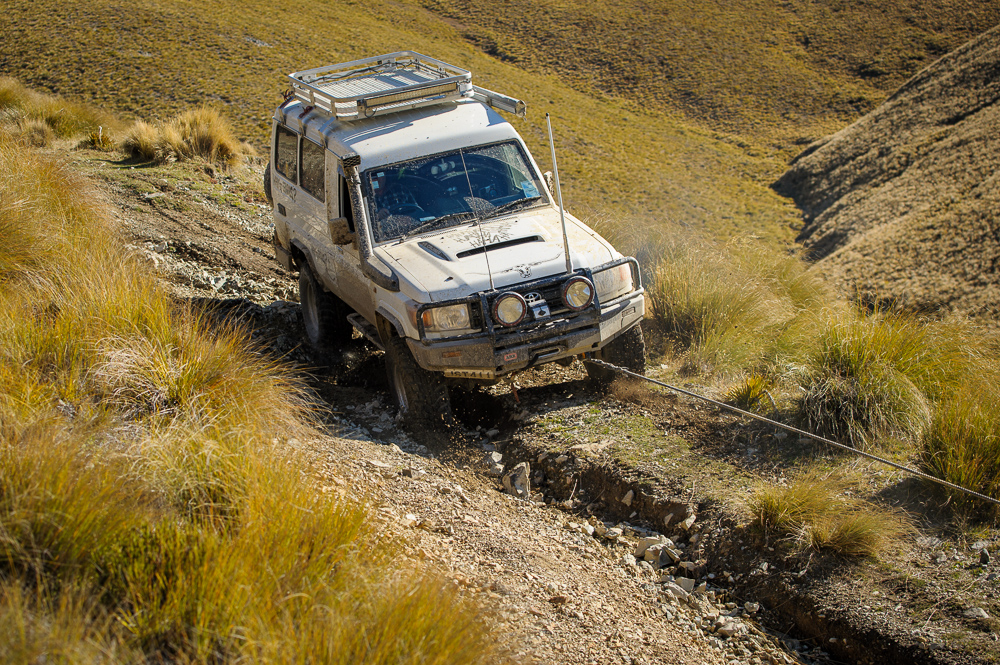 From there the track swung around to head NNE along the top of Long Spur, giving great views in the middle of the park and down either side of the ridge. Following the track around to the right and down put us at Tailings Hut for an afternoon break.

After this we followed the river trail south, a great track along the gulley. A digger was working on the trail, adding in drainage cuts, and there are three to four small river crossings (with the deepest being at Tailings Hut). 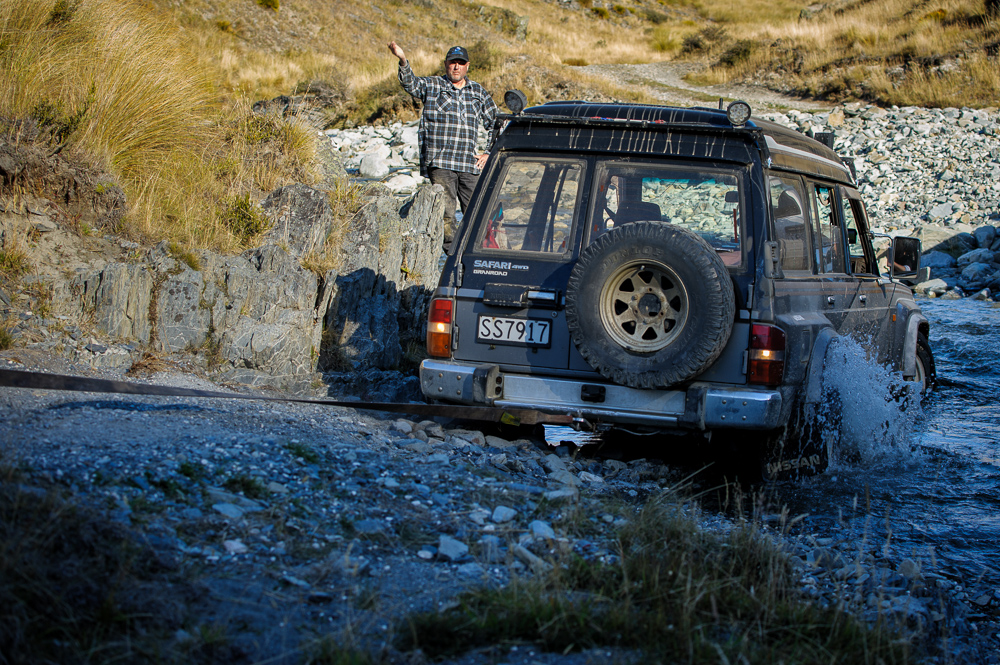 We left the park down the Mt Buster road, which was in better shape than some club members have seen it in at other times. An outback parked on the eastern corner three fifths of the way up was impressive, as there were significant drainage humps cut in the road (large enough to challenge the clearance of an outback).

A shared dinner in Naseby was interrupted by alerts that an aurora was occurring. A group headed out in the hopes of viewing, as there was indications that it might be a bigger aurora than usual, and might be visible with the naked eye. Unfortunately this wasn't the case, and after a while only the two Gregs and Brent were left. Fading aurora, temperature, and fatigue called them back in, but Murphy reared his head - in the morning it was discovered that the aurora went crazy about an hour later. 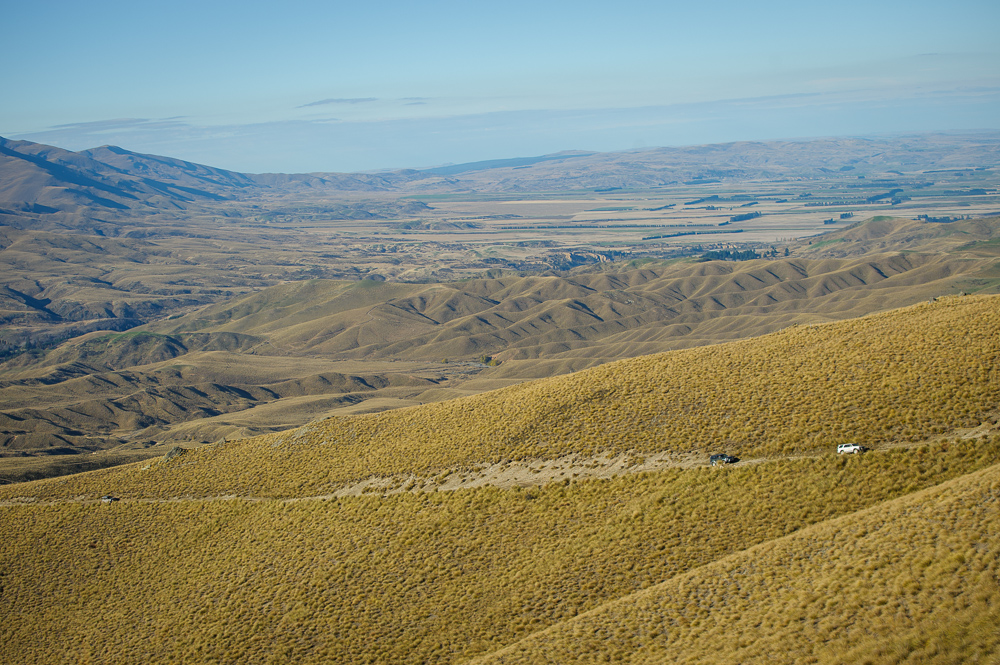 Another clear blue-sky day, and we headed up Mt Buster road to look for a different circuit through the park. Back down along the river to Tailings Hut (the opposite direction of the same track from Saturday) for morning tea. 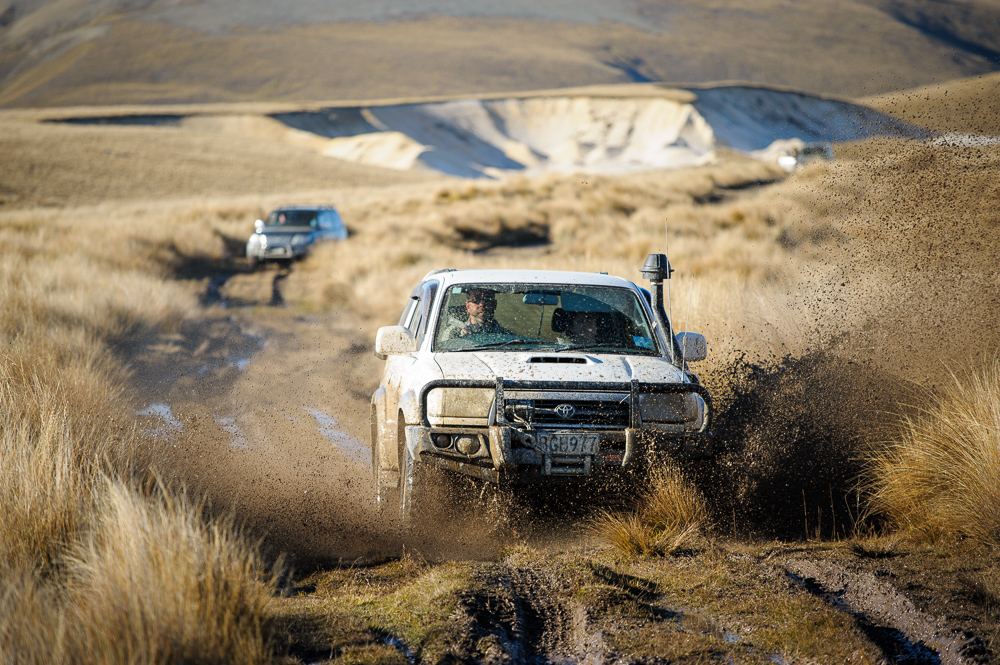 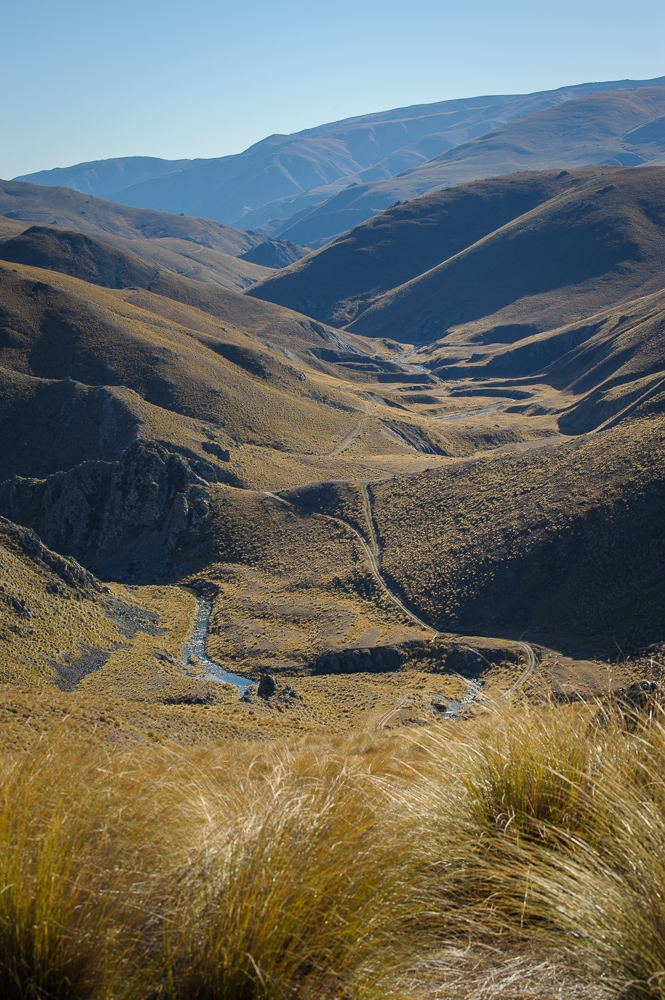 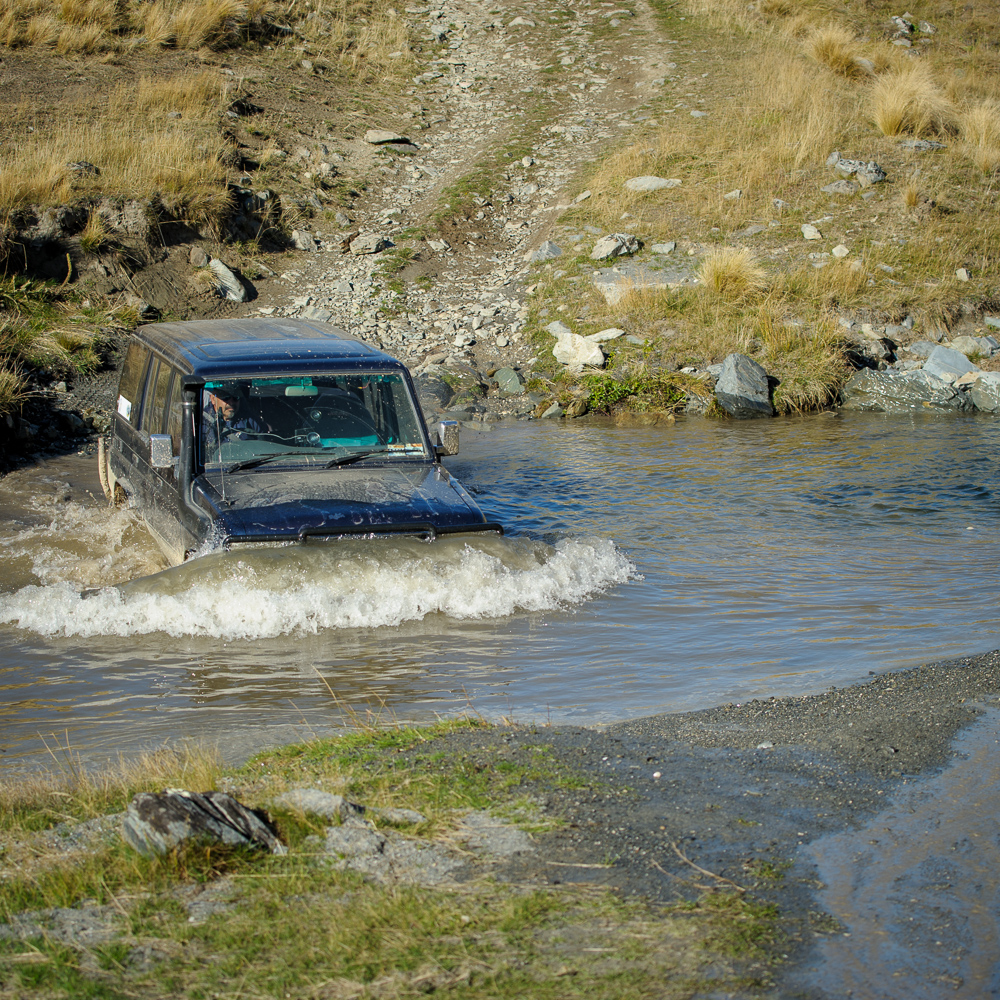 A quick consult of the topo maps for ideas, and the aim to head up around towards Hut Creek hut. There was concern that the topo maps didn't actually show the tracks joining up around the corner from Tailings Hut, but Lasz confirmed he had been able to get across the river and up the hill to those tracks on a previous trip. This worked out well, as there was a well established track on the other side of the river that connected the tracks.

After a climb up the hill we realised that we were heading for Brown Hut, but we hadn't been there in the weekend's journey anyway. The track winds around a gulley in an interesting drive that could be quite a challenge if the conditions were wet. 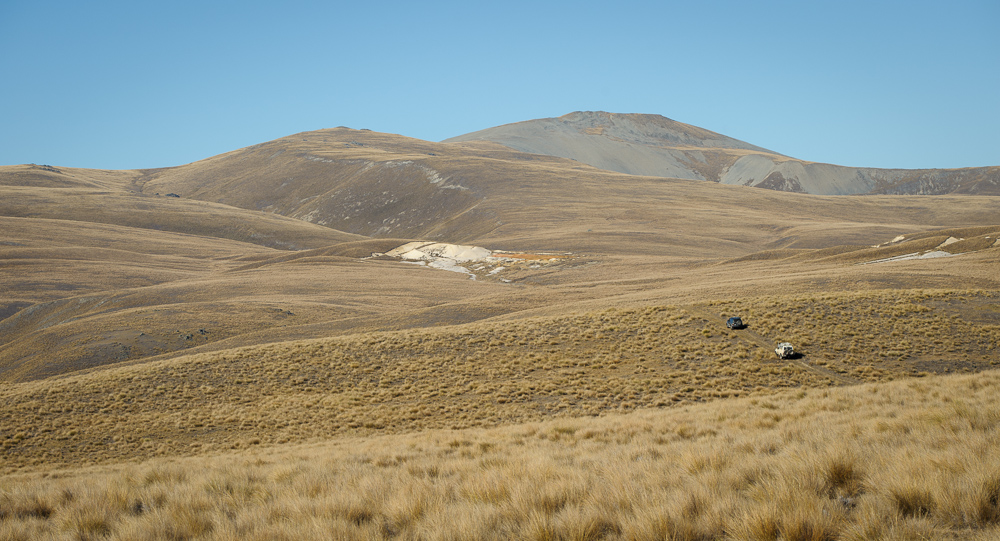 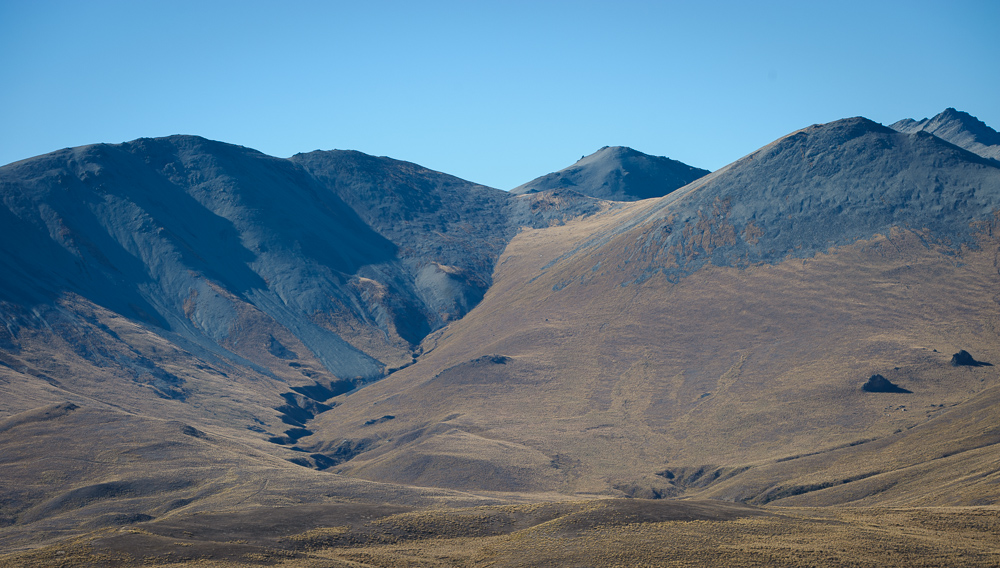 After lunch at Brown Hut we looped up towards Mt Kyeburn and back down past the Mt Buster diggings, and out the park the way we came in. 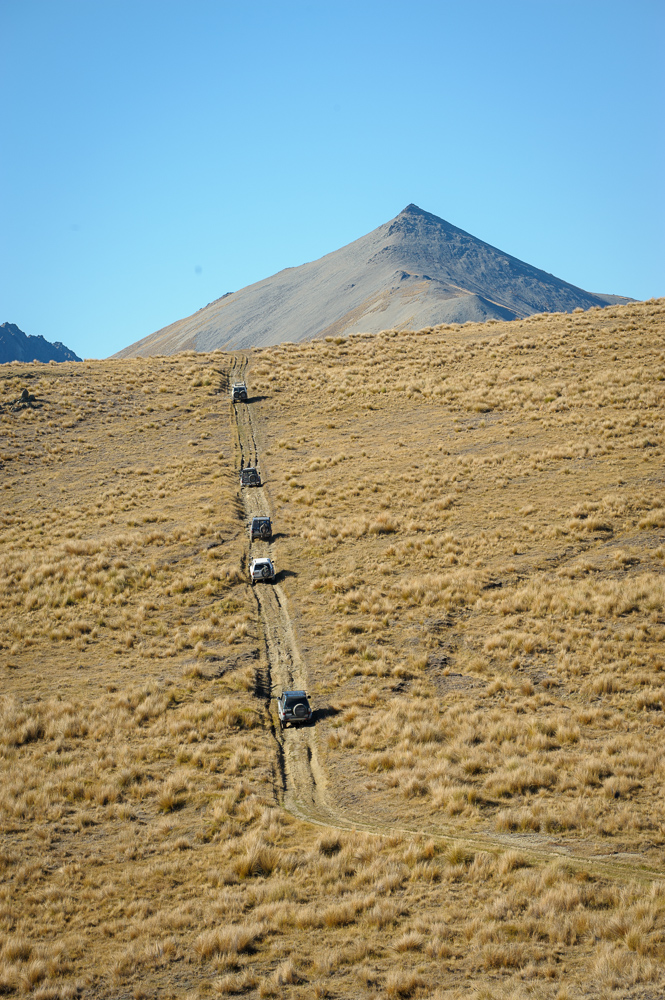 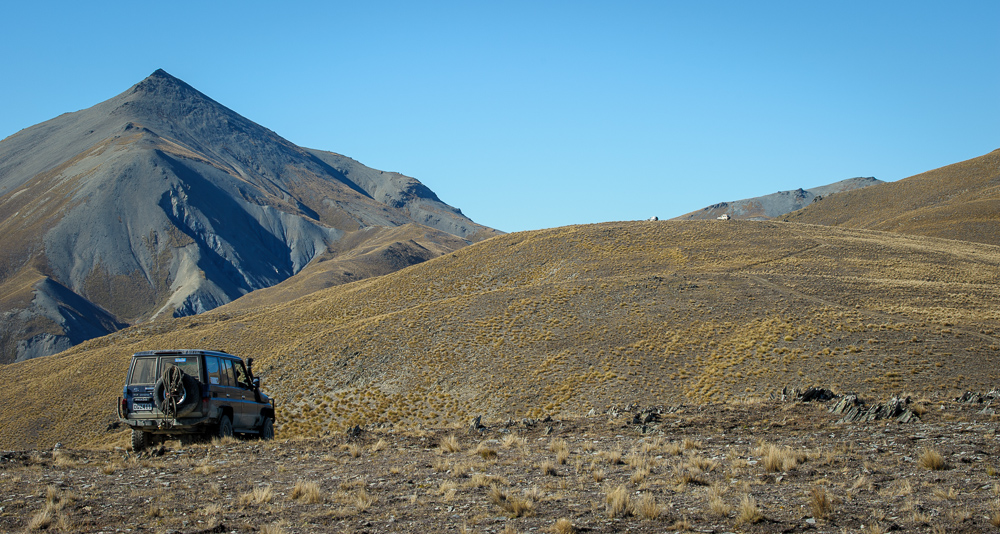 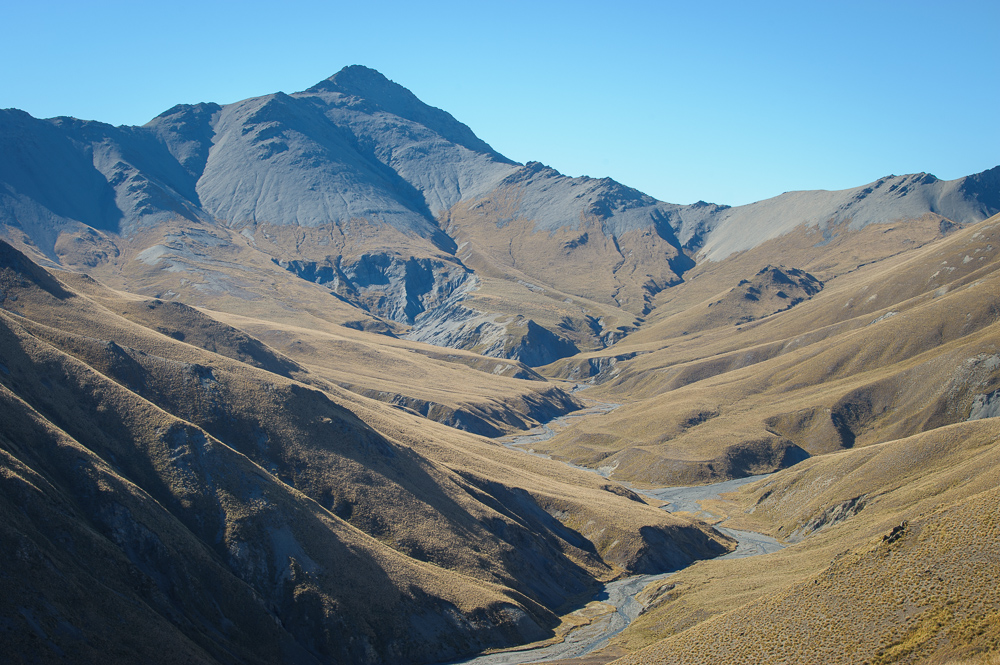